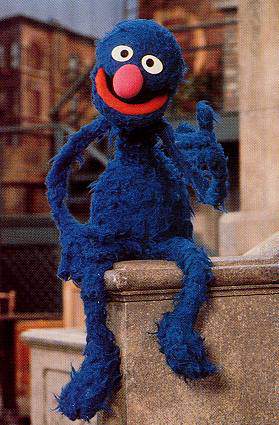 Happy Birthday Sesame Street!  Followed by The Wire and Mad Men, Sesame Street is my third favorite television show of all time.  I know it seems absurd that a children’s television show is put into a category that contains a show about the drug-trade and another about a sexist work environment.  But the common thread among all three shows is they are all brilliant.

Earlier this year, I read Street Gang – The Complete History of Sesame Street.  It wasn’t exactly what I expected it to be.I  I was expecting a run-down of the origins of the Muppets.  In fact,  they are barely mentioned. The first 150 pages focus just on the show’s conception. For instance, it began as a way to bring educational programming to inner-city youth.  This is why Sesame Street is kind of dirty and dingy.  It was designed to portray a world that inner-city children could relate to.  (That’s why I dislike the *new* Sesame Street where everything is sanitized, and Cookie Monster only eats “cookies sometimes.”)  It kind of takes away from the original idea.

Obviously, I loved Sesame Street as a kid.  But when I got the “Old School” DVDs, I was surprised at how much I still like it at 27.  The humor that makes learning fun for kids is also entertaining for adults, but the perspective of it has changed for me.  Forget all of this Ernie and Bert are gay bullshit.  What I want to know is – how did they pay rent?  Kermit and Grover have jobs, so why don’t they?

When I was younger, I used to love Ernie (and I still do).  But now I like Bert more in all his up-tight glory.  His reactions to Ernie’s pranks never get old.  In every skit, you know he is going to blow his top and get pissed – but the laughter comes from his reaction.  The same with Cookie Monster.  You know he is going to go crazy over cookies.  But it’s hysterical to watch him devour everything from a truck to a type-writer in the process.

Sesame Street was,of course ground-breaking on many levels.  It made learning fun.  A lot of kids learn more when they think they’re not learning.  I’m not suggesting Sesame Street tricked them into learning, but it took them on a ride where learning could be fun and engaging.  And let’s not forget the multi-racial cast.  Everyone at Sesame Street was made to feel welcome and that was exactly the point.  No one is excluded.  And here’s the real magic of Sesame Street: It made kids smarter, but also made adults feel like kids again.  No one so many celebrities and musicians showed up from time to time.

And for proof here’s one of my favorite clips featuring Johnny Cash:

And another where Cookie Monster goes on a classic rampage:

Looking Back on Sesame Street

I read this article from CNN today, and it makes me slightly sad that Sesame Street has changed so much.   It was supposed to dirty and grimy – it was designed to appeal to kids in the inner-city.   (Even its original cast was portrayed specifically with that in mind.  A pretty radical idea in the late 1960’s.) That was part of the original concept of Sesame Street.  Jim Henson  was super protective of Sesame Street – so much that when Michael Eisner wanted to purchase the Muppets, Jim Henson insisted that the Sesame Street Muppets not be part of the deal.

At 27, I have an almost strange obsession with Sesame Street.  There are tons of t-shirts with Sesame Street characters on them that you can purchase at Target (I have a couple, actually) play into a generation’s appetite for all things retro.  There’s many reasons though, why Sesame Street is the most beloved of all children’s shows.  I could go on, and cite excerpts from Street Gang – The Complete History of Sesame Street as proof.

But it’s interesting to watch the original episodes of Sesame Street as an adult, and see how weird, original, and brilliant it was.  There’s a lot of cultural references and satires within Sesame Street that I had no idea of when I was a kid.  I had no idea that Cookie Monster’s Allistar Cookie was a take on Masterpiece Theater.  (Just as I imagine that today, kids have no idea of Sesame Street playing on Mad Men a little while back.)  Grover over the course of the show, has held more jobs than most people have had in their lifetime.  Kermit’s inept take on a news reporter on Sesame Street News Flash is hysterical.  He’s often see eating as the camera starts rolling and interviews everyone from Rapunzel, young George Washington, to Christopher Columbus.

Two of my favorite characters of the show (Cookie Monster, and Oscar the Grouch) have seen quite a few changes over the years.  I don’t buy into the bullshit that Cookie Monster encourages mass consumption of cookies, and perhaps childhood obesity.  Kids know that he is a monster, and if you really think that Cookie Monster makes kids eat tons of cookie, there would also be an epidemic of kids eating telephones, cars, and typewriters.  As far as I know, there hasn’t been.  But in watching the old episodes, I still laugh every time Cookie Monster screams out “Cooooookie!” and goes berserk.  Concerning Oscar the Grouch, the creators might as well do away with him if he is even remotely warm and fuzzy.  He’s a fucking grouch!  (I actually would like to be Oscar when I get old.  He’s kind of my hero in a way.)

Even before Henson died, Elmo killed a lot of what was good in the show.  He was too child-like.  All of the Muppet characters were childlike in their own way, but they weren’t downright dumb.  And Big Bird filled the “every day kid” role already.  (By the way, Big Bird was every kid’s first introduction to androdgny).  Cookie Monster represented kid’s obsessiveness, Grover portrayed willingness to help others but not being able to for various reasons.

(D0n’t be surprised if I write more on Sesame on the 10th – their 40th Anniversary.  But for now here’s a few of my favorite segments.)

Kermit the Frog, Cookie Monster and the Mystery Box:

Ernie and Bert: (Audio is a little bit off, but this is classic)