Songs of Summers Past: Part 2

(Carrie became so inspired by my list last week, that she wrote up a list of her own.  Check it out.) 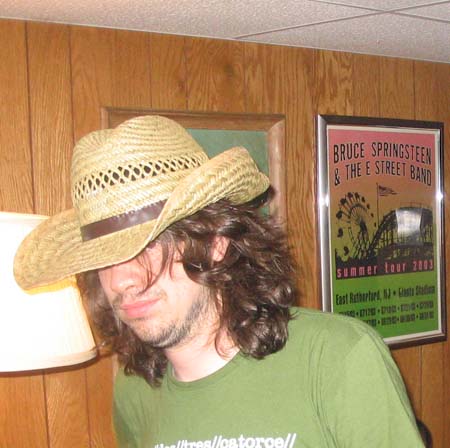 For me, “Rudie Can’t Fail” is the highlight of London Calling an album on which every single song would be a highlight on somebody else’s album.   London Calling was one the CDs that I brought with me on for a summer semester in Italy.  I had been to Europe before, but these trips were either with family or organized.  Living in a small town in Northern Italy for 6 weeks meant plenty of down-time to explore the subtleties of Italian culture I would not have otherwise been exposed to.  Each Wednesday morning the town opened its streets to a market.  The linens, Catholic relics, Italian leather were a link to the old world.  With my headphones on, I used to wander around the streets for hours trying to soak up as much as I could.  With its reggae and third world feel, “Rudie Can’t Fail” was the soundtrack to my self imposed Italian education.  The lyricsm “I went to the market, to realize my soul cuz what I need I just don’t have,” never seemed so prophetic and exciting.

For everybody who thinks of Kings of Leon based on “Use Somebody”, I urge them to listen to this song.  It’s an entirely different band.  Matthew Followill delivers one of his sexiest and dirtiest guitar riffs, while Caleb’s vocals are incomprehensible and boozy, yet strangely melodic.  The only lyrics that can be deciphered are “let the good times roll, let the good times roll”.   I became obsessed with Kings of Leon’s Aha Shake Heartbreak earlier that year, due to their opening slot of U2’s tour.  While U2’s show was perfectly rehearsed with little room for improvisation (not a bad thing, by the way), Kings of Leon came out as if their instruments were weapons in a bar fight.  There was a sense that anything could happen.  Aha Shake Heartbreak became my “go to” CD that summer, as I drove to and from my shitty job.   I probably broke the skip button as I kept placing “King of the Rodeo” on repeat.  I can’t understand the rest of the summer, but “let the good times roll” became something of a mantra.

I had recently discovered the genius of Elvis Costello about a year earlier, and was quickly becoming acquainted with his back catalogue, in particular Get Happy!! and “High Fidelity”.   On an album full of great songs, “High Fidelity” is a masterpiece – the piano never sounded so violent and menacing and also poppy.  A great sing-along song for the summer at full volume.  I used to always say that I never liked to drink too much a show, as I wanted to remember to it all.  Sadly, this was not the case at the Elvis Costello an Allen Toussaint show.  My friend, and my brother started tail-gating hours before the show.  To the audience at Wolf Trap, which is actually an outdoor theater sometimes used for a rock show, we were heathens.  Wolf Trap’s BYOB rules did not suit us well.  And our cans of Budweiser and bag of Lays was a direct contrast to everyone else’s wine and cheese.   At one point, I remember sitting on a pair of steps with my head between my legs desperately trying not to get sick.  As I tried to come to my senses, I did manage to hear “High Fidelity” in the background.

A while back, I looked at my girlfriend’s Ipod and was surprised to see “Let’s Go Crazy” on it.  I never suspected her to be a Prince fan.  Even more surprisingly, she had mistakenly downloaded a remix with an extended ending.  That purchase has always made me laugh and “Let’s Go Crazy” has become a song that we listen to quite often when driving.  She even knows the opening monologue by heart, which is even more hilarious.  Last summer while in Florida with her family, I bought a copy of Rolling Stone’s 500 Greatest Songs of Rock and Roll that led to a rather humorous (and sometimes tense) discussion with her father over which songs should and shouldn’t be included. It turned out to be a great bonding experience even if we disagreed on quite a few songs. He argued there were way too many Prince songs on the list (including “Let’s Go Crazy”) while I suggested that “Born to Be Wild” really isn’t that good, and was only included for nostalgic reasons.

Song of the Day: “When Doves Cry” – Prince

Without a doubt, “When Doves Cry” is one of the best singles (and songs) of the 1980s.  It sounds conventional because it’s been played so many times, but a dance-hall track that starts out with a guitar, has no bass-line, not to mention the key-board solo near the end of the song, is anything but conventional.

The theme behind “When Doves Cry” is also conventional (love gone bad) but Prince delivers it in such a conventional way as well.  Comparing himself and his lover to his parents is almost terrifying – “maybe you’re just like my mother – she’s never satisfied”.  There’s also the stranger imagery of Prince telling the lover about animals striking curious poses, and “they feel the heat between you and me”.

When I was younger I must admit that I never liked Prince.  I was too young to understand his importance in the 80’s, and only knew him by “1999” – which I became tired of once it actually turned the year 1999.  Sometime in college, someone played me “Purple Rain”, and it blew my mind that Prince was not just that freak with the song that made me hate the turning of the millennium.