Halloween is great.   As a kid, it’s great, because you get free candy and you’re encouraged to eat candy.  It can’t get any better than that.  Unfortunately, I never had a great costume.  One year I was a ghost, and I don’t remember anything else I was, because I can assure it was never original, or inventive.

In high school, I didn’t care for Halloween too much.  Maybe I felt like I was too “grown up” for Halloween being high school.  But it was probably more for the fact that I could never think of a good custom.  Why I could never think of a good one, I’m not sure.  Especially since I have a slight obsession with masks – both literal and figuratively.  (Must be the English Major in me.)

In college, Halloween became cool again.  It was an excuse to have a party.  Can’t get any better than that.  I managed to dress in drag a couple of times.  I’d be able to pull it off a bit better these days, consider I now have long hair.

Candy (Even at 27, this is still a big draw.  Especially when it involves Reese’s Peanut Butter Cups.  I’m a peanut butter fiend.)

Mythology About Halloween.   The History Channel is full of specials on the devil, witches, ghosts, and all kinds of other cool stuff.  These specials also rival the specials on 2012, and all of the specials devoted to anything Dan Brown related.  Almost.  My favorite was a story involving a card game in the Middle Ages.  A bunch of guys were placing bets on Saturday night, close to the Sabbath.  Around midnight a mysterious stranger comes in and they keep on betting past midnight, and at the end the stranger reveals himself to be Satan, and burns them all because they were betting on the Sabbath.  Awesome.

Classic Halloween Specials.  It’s the Great Pumpkin, Charlie Brown is still the quintessential Halloween special.  When I first saw it, I kept thinking that there might actually be a Great Pumpkin.  Pretty much all of the Simpson’s Tree House of Horror specials are all fantastic.  My personal favorite is the episode where Homer sells his soul for a donut.

Horror Movies.  Okay, I know you’re going to say, ‘Matt you’re no fun’.  It’s true, when comes to horror movies I’m not.  Ridiclious plot lines, bad acting.  Need I say anymore.  I’m not a person who is scared of blood or violence, but today’s horror movies rely too much on unneccessary violence and gore.  Use your imagination people!

And while I’m thinking of Halloween, let’s take at Halloween through the years:

1517 – Martin Luther posts his 95 theses on a church door in Wittenburg, ushering in the Protestant Reformation

1981 – Harry Potter becomes “the boy who lived” when Voldemort’s killing curse backfires.  (Did I just reveal my inner nerd?)

The front page of Dylan’s site is pretty awesome.  I seriously can’t wait to hear the Christmas album, but I’ll have to wait until Thanksgiving.

Tagged as Bob Dylan, Christmas in the Heart

Man Vs. Food has become my newest obsession.  And with the exception of Mad Men, is probably the best show on TV. I stumbled upon it by accident, and found myself shocked, horrified, and amused at the things Adam Richman could eat. And then I was hooked.

Usually food eating contests, are quite disgusting.  Who wants to see a dude shove as much food into his mouth as quickly as he can? Luckily, the show doesn’t do that.  As Richman’s voiceover at the beginning of the states he’s “no competitive food  eater, just a guy with an appetite.”  And that’s true.  Most of the time he wins the competition, but there’s several when he lets “food win”.

I was excited to see that last night’s show would be visiting my hometown of Baltimore.  Sadly, they did not visit any of the place I’ve gone.  I was glad to see they included a section about crabs, and even being from around the area I did not know pit beef was a local thing.  That being said however, I was left wondering why the Baltimore area was shown as a carnivorous area.

If you’re looking for junk food and weird food items, what about Lake Trout?  Okay so The Blue Moon Cafe’s Cap’n Crunch French Toast has already been covered by Diners, Drive-In’s and Dives.  (Has Paper Moon appeared on any of these shows?  If anyone knows let me know.)

On a good note, now I know where to go to get Crab Cakes that don’t have mayonnaise.

(Since I started this a mostly as music blog – though I do occasionally write on other subjects – I thought it might be fun to include a series of posts devoted to albums that I love but have kind of disappeared under the radar for some reason or another.) 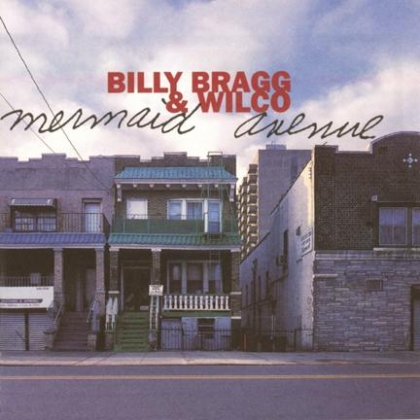 The story goes that before his death, Woody Guthrie left a bunch of unpublished lyrics offering them to Dylan.  Dylan seems to confirm this in his memoir Chronicles Vol 1 (and just where the hell is Volume 2, Bob?).  I say “seems to” because it’s always hard to figure out the truth with Dylan.  In the memoir, Dylan shows up at Guthrie’s house only to be told off by the babysitter.

As much as I love Bob Dylan, I’m hesitant to think of the actual result.  For the first few years of his career, Dylan was intent on copying Guthrie while creating his own sound, so it would have been superfluous for him to record an entire album of Guthrie originals.

Which brings us to Mermaid Avenue.  Decades later, Guthrie’s daughter offers some of the unfinished songs to Billy Bragg, who then recruits Wilco to also contribute to the album.  Really, you couldn’t ask for a better combination of musicians to create an album like this.  Bragg whose leftist politics picks up Guthrie’s revolutionary spirit, and Wilco one of the few American bands in the past decade who constantly pushed the limits of what rock can achieve in the 21st century.

I’ve always been attached to this album for a number of reasons.  Unlike a lot of other modern folk leaning records, the album manages to sound contemporary and timeless at the same time.  It also contains perhaps three of the best opening tracks on record (Walt Whitman’s Niece, California Stars, Way Over Yonder in the Minor Key).  Walt Whitman’s Niece lyrically is really an absurd song, yet with its call and response would in a perfect world, be the ultimate bar anthem.   California Stars has kind of become the anthem from the album, with both Bragg and Wilco still performing in their set-lists.

I suppose what really makes this album a success is that it actually works.  Usually side projects like these fall flat on their faces. The musicians try to sound too much like their heroes. Or take the extreme route and create something that is unlistenable, and does not capture the spirit of the original musician.  But trying to modernize yet still have Guthrie’s folk spirit is a testament to both Wilco and Bragg.  Hoodoo Voodoo’s carnival sound perfectly fits the fun and childish lyrics. She Came Along to Me’s defiant attitude is expressed in the way Bragg sings “and maybe we’ll have all the fascists out of the way by then.” It doesn’t seem like a lament but rather hopeful.

The second volume of Mermaid Avenue (which I like) is not nearly as good.  Perhaps this kind of combination could only occur once.  And as much as I like Billy Bragg, Wilco and Woody Guthrie, I think it’s the best thing to come from all three.

Amelia (Quite Possibly The Worst Movie of The Year) 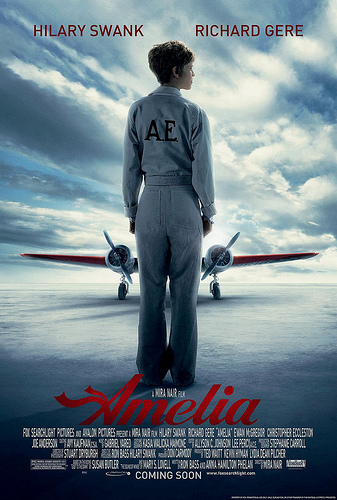 But where to start with Amelia?  Usually I like Hilary Swank, but she was not convincing portraying a woman who broke barriers for both aviation and women. You’re seriously going to tell me that a woman who flew solo across the Atlantic is as boring as my empty box of cereal?  Anything excitement that Amelia  Earheart had in her life is gone.  The movie spent so much time concentrating on her love life, and forgot why people were interested in her in the first place: flying.  There was no character development of Swank’s Earheart.  Based on the movie, I have no idea what got her into flying.

Richard Gere as her husband gets a lot of blame too.  Upon hearing that his wife made it safely across the Altantic, an apparently relieved (though you wouldn’t know it) Gere shouts, “Wonderful news!”  Who says that?

The worst (and best part depending on your view) is Earheart’s fated trip to cross the globe.  Apparently one of the radios at a coast guard station was broken, so Earheart had no idea where she was.  But there was one mention of this mishap, and meanwhile I’m supposed to be in suspense?  If the climax of a movie is dependent on a character’s major fuck-up, please add some depth to it!

The real tragedy is that this could have been a great movie.  But somewhere, somebody forgot to create an actual convincing story out of events that gripped the world in the late 1920’s and 1930’s.

Where The Wild Things Are

Where The Wild Things Are, gets my vote for possibly the best movie of the year.   Even though, I remember reading the book as a kid, I don’t really remember much about it other than the imagery.  I loved the illustrations, and I’m willing to bet that plays a huge part on its lasting presence in children’s literature.

As a kid, I had a wild (haha) imagination, and would often pretend that I was in a different world much like Max.  And the characters in my own mind, were an extension of my personality or a version of myself that I wanted to be.   This emphasis on imagination might be why when some parents (and critics) have bitched about the movie not being for kids. Kids use imagination to deal with their problems and sort out what is bothering them.  At the end of the movie, Max discovers much about life, and himself that he perhaps otherwise couldn’t.

Speaking of  people complaining that it’s not a kid’s movie…the marketing is clearly aimed at people like this guy.

Can It Be Christmas Already? 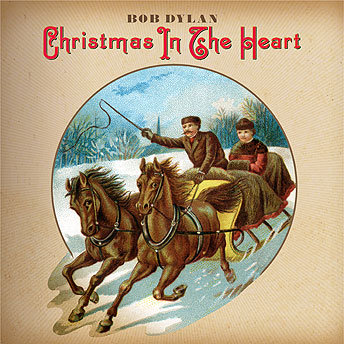 I seriously cannot wait to hear this album.   Guess I’ll have to wait until Black Friday.  This will be the first time in a while I haven’t bought a new Dylan album the day it was released.

Leading Us Absurd
Create a free website or blog at WordPress.com.